With a family history in Queensland dating back to 1856, the Wagner family is considered a major contributor to the development of Regional Queensland and the wider Queensland economy.

In 1989 Henry Wagner and sons John, Denis, Neill and Joe established the construction materials and infrastructure company Wagners, which was recognised by the State Government in 2009 as the company that has had the most significant impact throughout the history of Queensland.

The continuing growth of the business saw the listing of Wagners on the ASX in 2017 and Wagner Corporation expand into property and infrastructure development and asset management.

With a passion for aviation and a vision for better connectivity for the Toowoomba Region, the family decided to develop their property at Wellcamp Downs, which they had owned for over 25 years, into a business park and aviation precinct.

Built in 19 months and 11 days from 2013-2014, Toowoomba Wellcamp Airport is the anchor tenant to Wellcamp Business Park and the first privately funded public airport in Australia. As the gateway airport to the Darling Downs Region and with international designation, the Airport offers enhanced passenger connectivity for the region and is home to Queensland’s only international, dedicated 747-8F freighter service.

In 2017 the family continued their intrepid desire for innovation with the construction of the  40-tonne Pinkenba Wharf on the Brisbane River. Design and construction of the Wharf involved a number of ‘firsts’ and has left a legacy of industry-leading knowledge and experience in maritime design.

In 2018 Wellcamp Business Park and Toowoomba Wellcamp Airport became the first regional site for the establishment of the Qantas Group Pilot Academy, which will train up to 250 pilots per year.

The success we see today, stems from Henry Wagner’s love for the industry and his passion for economic growth in Toowoomba, which lead him to develop a ready mixed concrete business in his early career - forming the basis for the evolution of Wagner Corporation. 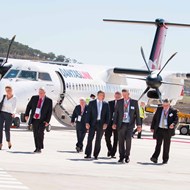