Toowoomba export hub to boost jobs on the Darling Downs 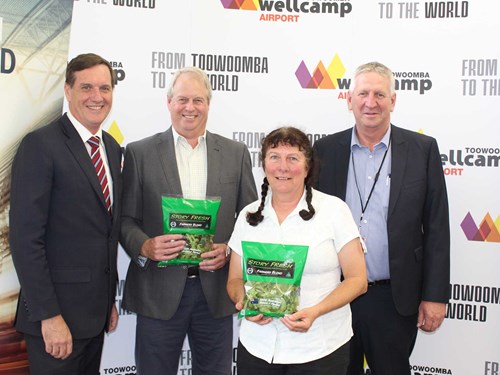 Toowoomba has been selected as one of two regional sites for a multimillion-dollar investment to boost jobs on the Darling Downs and enhance the region’s reputation as an agricultural export hot spot.

Premier Annastacia Palaszczuk announced today that Wagner Corporation had been selected to construct a Regional Trade Distribution Centre (RTDC) at the Toowoomba Wellcamp Airport, with Cairns selected as the site for a second Centre.

“This will supercharge rapid airfreight access for agricultural producers,” the Premier said.

“It means graziers and growers will have easier access to export markets and that means jobs.

“In 2017, we said we’d deliver an export hub for Queensland but following a very strong response we decided to deliver two.

“Now we’re delivering on our commitment and Toowoomba will reap the benefits.”

State Development Minister Cameron Dick said the RTDC on the Darling Downs would enhance productivity and capitalise on Queensland’s global reputation as a leader in the production and processing of quality agricultural produce.

“The expansion will comprise four state-of-the-art large cold rooms, a temperature-controlled store room, a store room and an external storage area,” he said.

“The new facility will be used to process premium export goods including beef, dairy products, fresh fruit and vegetables, pork and packaged nuts.”

“From our Queensland Beef Processing Strategy 2019-2022 to our backing of companies like pork production group Swickers in Kingaroy and vegetable grower Qualipac in Inglewood, we are showing our support for regional businesses and Queenslanders who work there.

“This facility will give many of those businesses, most of whom have a presence in Asian markets, a greater opportunity to expand to other marketplaces in the region and grow Queensland’s strong, green and clean reputation as a primary producer.”

Toowoomba Wellcamp Airport General Manager, Robert Kasch said that he was proud that the Darling Downs had been selected as the location for the Regional Trade Distribution Pilot Centre.

“As a proud Toowoomba-based company, the interests of Wellcamp Airport are closely intertwined with those of primary producers and processors across the Darling Downs and regional Queensland”, Mr Kasch said.

“We look forward to building a centre which will take the agricultural export capacity for this region to the next level, for the benefit of generations to come.”

Wagner Corporation plans on a 10-month build, with construction starting in the second quarter of 2020.